Sewing classes for children are an important part of my class programme.  I learned to use a sewing machine at age 7. So I’m committed to the belief that children should all learn to sew when they’re very young (girls and boys!)

This week at Artisan Stitch, I held one of my  sewing classes for children, or rather for children and their parents ( to qualify you had to be under 16 and bring your Mum).  Attending were Sophie, aged 9, and Libby aged 12, with their Mums Jen & Jackie.  Both girls threw themselves into the lesson with enthusiasm and completed their sewing practice sheets, then both passed their Sewing Machine Driving Tests with distinction.

Pincushions were the chosen project for all present so we had some colourful items which will be very useful in future.  Everyone (including me) thoroughly enjoyed the morning and I’m expecting to see them both in the studio again very soon. And perhaps both of the Mums too.

Read about my Sewing Classes for Children
Update:
Since that class, Sophie has gone on to attend more of my sewing classes for children and completed her level 2 week. She has also joined Young Embroiderers, the youth section of the Embroiderers Guild (Edinburgh Branch). Her Mum, Jen also helps out at the Young Embroiderer sessions and now enjoys embroidery herself. Sophie is intending to become a Fashion Designer.
Libbie also came for further lessons and made make-up bags and cushions.  She established a lucrative business by selling make-up bags in the school playground at lunchtime. 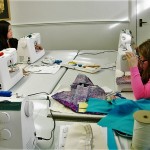